by Iva
in Destinations
Reading Time: 5 mins read
Share on FacebookShare on Twitter
Please note this post may contain affiliate links. IvaSays may earn an Affiliate Commission if you purchase something through recommended links in this article, at no extra cost to you.

I’ve never been much of a fan of Ohrid, even though this is a UNESCO’s cultural and natural world heritage site. As one of the most popular spots in North Macedonia, I’ve always ended up in Ohrid during the high summer season, which meant crowds and noise. However, several days ago we made a random plan with Milena to visit Ohrid and photograph it, so we could review it.

Surprisingly, this poorly planned adventure turned out to be a wonderful trip that everyone could easily enjoy. We traveled by car to Ohrid from Skopje. The road wasn’t busy since it’s the winter period, plus we were traveling during business days. The weather was on our side and the sun was following us, creating stunning views on each corner. We were bound to have a great time.

Read next: 10 Breathtaking Photos of Sunsets in Ohrid, North Macedonia 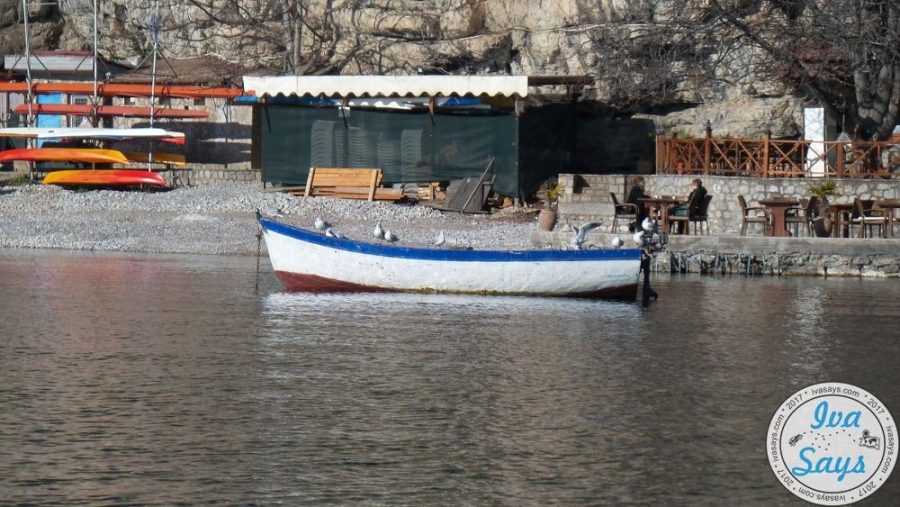 We arrived in Ohrid around 2:00 PM and went directly to our apartment Cosy Ohrid Apartment (our Airbnb accommodation in Ohrid). We’re always anxious to see the accommodation first and then move on to the exploring part. We were happy with our Airbnb apartment in Ohrid, so we just left the bags and went to the city center.

Honestly, everything was gorgeous; people were relaxing on benches along the Ohrid lake or walking along the path that offered unforgettable views of the sunny horizon. We were a bit tired from the trip, so we just walked around and then had lunch. We were happy, even though it was pretty cold outside, and it was getting dark. On our way towards the car, we were walking along the lake and were mesmerized by the sunset.

The place in general – Ohrid is a beautiful city, that’s never been put to question. Here are some reasons to visit Ohrid: it has an incredible charm thanks to its numerous landmarks, cobblestone streets, and authentic houses, and medieval look. Ohrid at one point was considered the Jerusalem of the Balkans because of the 365 churches it had (one church for each day in the calendar). It is also popular for being positioned on the oldest lake in Europe, Lake Ohrid, and Samoil’s (Samuel’s) Fortress that watches over the city.

Parking – as it is a popular tourist spot, Ohrid has organized parking throughout the city. One hour costs 30 Macedonian denar or around 0.5 euros; payments are made by sending an SMS (text message). It’s usually crowded during the summer, so finding a spot can be a real challenge. Those looking for a free option can leave their vehicles at the Marina and then walk towards the city along the lake.

Nature – Ohrid is a UNESCO World Heritage site and that says enough regarding its nature. Situated along the Ohrid Lake and under the Galichica National Park, Ohrid offers clean air, greenery and lots of activities for nature lovers. Lake Ohrid has over a 100 beaches, and it’s perfect for a nice swim in the summer to cool off from the hot temperatures in North Macedonia.

Shops – in the city visitors can find lots of souvenirs and authentic shops as well as jewelry shops, boutiques and markets. Depending on what you’re looking for, you can find generally cheap souvenirs or expensive Ohrid pearls jewelry. Nevertheless, you’ll have a lot of options for spending your cash.

We spent three whole days exploring Ohrid and several nearby landmarks. The first day we had only the afternoon and therefore walked around the lake and had lunch in Leonardo, a nice pizza place. The second day we went to the Samoil’s Fortress, Plaoshnik, Kaneo and even took a boat ride. An entire day was reserved for visiting the Bay of Bones and St. Naum, since they’re 15 km and 30 km away from Ohrid, respectively.

Visitors should keep in mind that Ohrid is on a hill and there’s a lot of walking involved when it comes to exploring its landmarks. You’ll need comfortable clothes and shoes as well as sunglasses and hats during sunny days. There are coffee shops and restaurants around, so you’ll won’t be suffering for drinks as long as you have cash. The city due to its uphill position and narrow, cobblestone streets is not wheelchair friendly.

Below you’ll find a list of the things that everyone must visit when in Ohrid; however, more information regarding these sights shall be provided in future posts.

Things to see in Ohrid

Verdict: Sad to Check Out

All in all, we had an unforgettable adventure in Ohrid, and we were sad to check out. I must point out that the City is far from being this empty during the high summer season and I’m very glad I had the chance to explore it when it’s not crowded and noisy.

Visit Ohrid in the summer to get a whole different experience of the city and the locals. From nightclubs to beach parties, Ohrid in the summer is one of the most popular destinations for young adults, couples traveling together, and even solo travelers that like parties.

All my previous experiences in Ohrid were easily replaced with this wonderful 4-day trip and I recommend visiting Ohrid to everyone interested in exploring historical, architectural and religious monuments, and wonderful UNESCO recognized nature.

A Travel Bag for Everyone’s Taste

Traveling To Puerto Rico? Here Is What You Need To Know About This Caribbean Island

A Travel Bag for Everyone's Taste