Ptuj, Slovenia – The City of Festivals 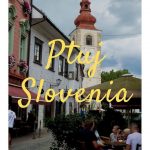 Are you a lover of history, art, or music and looking for your next travel destination for your European vacation? Look no further because the small, charming European town of Ptuj in Slovenia makes sure you dabble your artistic sense and gets your creativity going like nowhere else.

You can choose to visit Ptuj during one of its festivals – and there are many – or during the Fashion Week Project, it has every year, of course, if fashion is your thing. You can simply go to Ptuj for its beautiful nature and historical landmarks – from castles to a city tower.

For whatever reason, you decide to add Ptuj to your bucket list, here is our travel guide to make sure you have all the necessary information before you head out on your awesome, fun-filled vacation to Ptuj.

Ptuj is a medieval town in northeastern Slovenia. The town was formed from a military fort during the Roman empire. It’s actually the oldest recorded city in Slovenia.

Ptuj enchants visitors with its mysterious passages and unforgettable scenery. When one walks the cobblestone streets of Ptuj, one feels the spirits of the past all around them. This and the many landmarks create the perfect reason for any traveler to visit the oldest town in Slovenia.

There are other reasons to visit this medieval town. From history to art and music with never-ending festivals and fairs, there is always something new to experience.

The City of festivals

Ptuj is known as the “City of Festivals” for the many festivals that it hosts throughout the year.

There is always an occasion for a festival in Ptuj during any of the seasons of the year, and they are perfect for the wine lovers. Almost all of the festivals include some form or dedication to wine tasting.

Like at the Salon Sauvignon – a wine festival dedicated to the great Sauvignon wines from Slovenia and international. Or, food tasting at the Specialties of Slovene Farms festival – dedicated to tasting Slovenian food, wine, and spirits. And if you are a logophile, then the Days of Poetry and Wine festival should be on your bucket list.

In between all these wine tasting festivals, there are other awesome fairs that bring in a large audience to Ptuj. It has something for everyone – a contemporary art festival, a medieval festival, a Roman fair, and even one of the top 10 carnival celebrations in the world, Kurentovanje.

Art and Music Scene in Ptuj

As mentioned before, Ptuj is has a vast art and music scene. The town loves and embraces all forms of creativity.

This Slovenian town has a contemporary art festival that is great for aesthetes or art enthusiasts and a poetry festival for literature lovers. The town, also, has several cool café bars with music themes and active music scene.

Public Transportation and Parking in Ptuj

What’s the best way to get around the town? Where to find parking and how much does it cost to park in Ptuj? These are all important questions that need answers for any traveler that plans to visit this cool Slovenian town.

Ptuj is not the most expensive city in Slovenia when it comes to parking. However, free parking is limited and it’s the furthest from the old town. We parked our car for free at the allocated parking lot for the Ptuj Castle, which in turn determined our first destination stop.

Getting to Ptuj from Ljubljana

If you can’t rent a car to drive from Ljubljana, then you can use the bus or take a train to get to Ptuj. There is a direct train that goes from Ljubljana to Ptuj with a journey time of around two and a half hours – five times a day – at a reasonable rate of around 10 euros for a one-way adult ticket. Yes, they do have discounts for children, students, and seniors.

For a longer journey of approximately three hours, you can catch a couple of busses that take you from Ljubljana to Malibor and then Ptuj.

Getting to Ptuj from Kranj

For those that don’t have a car or won’t be renting one, you can reach Ptuj from Kranj via train. The journey takes about three and a half hours, so preparation is key to exploring the old town if you are going only for half a day because of the long travel duration.

We didn’t use public transport in Ptuj, since we drove with our own car. However, the train station is not too far from the old town, which you can explore on foot.

Things to see in Ptuj

Be sure to check out the Museum Ormoz that is in the center of the old town. The entrance is free and has awesome local artifacts, facts, and tour guides for the town.

The old town’s square has several cafes and restaurants, right by the Town Hall, and down the street toward the Orpheus Monument. If you are into burgers we recommend to try Hamburger Hill. The meat and buns are huge but absolutely delicious.

If you are interested in other travel destination reviews, check these out:

What You Must Know When Visiting Meteora Monasteries in Greece