by Iva
in Accommodations
Reading Time: 6 mins read
Share on FacebookShare on Twitter
Please note this post may contain affiliate links. IvaSays may earn an Affiliate Commission if you purchase something through recommended links in this article, at no extra cost to you.

I mentioned in my post regarding the perks of using a local travel agent and that when I’m in Skopje, I often travel with the Waikiki Travel Agency, whom I know and trust. So, one random day I went into their office to see if they have something fun on the offer and they mentioned the St. George Ski and Spa Hotel in Bansko, Bulgaria.

Bansko is a popular ski resort in Bulgaria and even though I’m not an enthusiast for winter sports, I wanted to explore a Bansko as I’ve heard that it’s a very affordable winter vacation spot in Eastern Europe.  St. George Ski and Spa Hotel had a great price and looked like a great place to stay while in Bansko.

As I wasn’t going to Bansko for skiing or snowboarding, I focused my hotel decision on the hotel’s amenities, spa and wellness center, and location to the old town of Bansko.

I was told that the hotel uses natural mineral waters inside the pool and jacuzzi, so that was a strong selling point for me. I love relaxing and rejuvinating in natural thermal baths. The hotel was also a walking distance from the old town of Bansko, and very close to the gondola ski lift. The decision was made –  St. George Ski and Spa Hotel was it.

We drove from Skopje and went to a little shopping detour in Sofia first. By the time we were getting near Bansko it was heavily snowing and we could barely see anything in front of us. Naturally, that made the arrival a bit tensed; however, once we parked the car and checked in, everything seemed better.

St. George Ski and Spa Hotel has a nice, modern design and feel to the exterior of the hotel. It’s nicely designed and goes perfectly with the white snow and high mountains behind it.

Inside, it was cozy and warm, the perfect atmosphere to make us forget our infamous trip from Sofia to Bansko. We also took a walk around the town while it was snowing and fell in love with it. 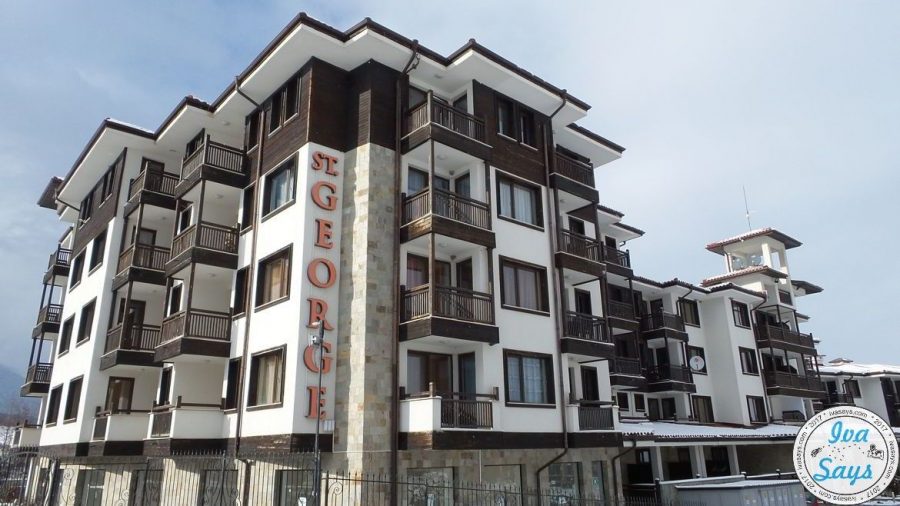 The building itself looks new. St. George Ski and Spa Hotel has a stonewall and wooden decoration exterior. The entrance is attractive, while in the back there’s also an area that resembles a small scale garden.

However, due to the snow, we couldn’t really see how it was decorated; all we could see was whiteness. The insides of the building were pretty too. There was a small lobby area with a bar and the reception; from that point, you can continue towards the ground floor rooms or take the elevator/stairs to go up to the other rooms or down to the restaurant and the spa.

Near St. George Ski and Spa hotel there isn’t much to be mentioned since it’s a bit in the middle of nowhere. There are several unfinished buildings, that will probably become hotels in the future.

However, for the time being, the hotel is the only thing worth mentioning. Nevertheless, a short walk down the main road you can find the Mall Bansko as well as lots of shops, restaurants and the gondola ski lift. You can also walk to the Old Town of Bansko –  where all the historical sights are located.

There is a small asphalted parking in front of the hotel, where around 10 vehicles can be parked. Moreover, guests were also leaving their cars along the main road next to the hotel and they didn’t seem to have any problems with the authorities for doing so.

Oh, the room; this was our main issue from the moment we arrived. At first, all we saw was a nice, large room with new furniture. However, this image started fading as we discovered many problems.

First, the room was cold because of the too small radiator, even though it was set at the highest heating level. Second, the Wi-Fi signal in the room was terrible or non-existent. Third, the towels were obviously too old and should’ve been changed for sure. Fourth, there were only two power sockets, which is ridiculous in the 21st century. Fifth, the bed wasn’t comfortable, and the pillows were of a bad quality; only one per person.

Even the composition of the bed and the lamps above it was somehow distorted; everything seemed as it was done in a haste and therefore poorly. We did get an electrical heater after we complained to the receptionist that it was too cold, and we also noticed that other people were getting them as well; so, I guess that’s a known problem in the hotel and you shouldn’t be ashamed to ask for one.

With the electrical heater and the radiator, the room was warm enough, so we could feel comfortable in normal clothes. I’d like to point out that the room includes a hair-dryer, hotel slippers, and bathrobes.

The staff was really nice, welcoming and helpful. They answered all our questions and helped when we complained it was cold. From the restaurant to the spa center, everyone was always in the mood to communicate with the guests in the most pleasant manner and that left a very positive impression on us.

During the Stay at St. George Spa & Ski

Three days isn’t much, but we did manage to explore Bansko properly as well as to enjoy the spa of the hotel. As I said, we got an electric heater and therefore warmed the room.

In terms of the food, I’d say it wasn’t anything special, but it was okay nonetheless. There were usually at least three main dishes to choose from as well as several side dishes such as steamed vegetables, cream salads etc. There were usually two or three types of desserts, too. The great part about the food was the fact that drinks were included; so, we enjoyed some wine and soft drinks as well as coffee without paying extra.

During the first day, we explored the Old Town; there, you can find some authentic architecture, several museums, and a national gallery. Also, there’s a church worth visiting too. There are many souvenir shops obviously as Bansko is a tourist attraction after all. Unsurprisingly for a ski center, both the Old Town and the new part of Bansko are filled with shops where you can buy/rent ski equipment. There are also lots of restaurants, so you can easily find traditional Bulgarian cuisine as well as international dishes like pasta and pizza.

During the second day, we took the gondola ski lift and rode for half an hour to get to the middle point of the mountain maybe? That was the part where you could find those wooden huts that serve snacks, coffee, and other drinks. Also, that’s where you can get ski lifts and reach most of the ski tracks of the Bansko ski center. I’d say it was possibly an unnecessary treat for us since we don’t ski. However, the views from the top were worth it! You should keep in mind that the ski center closes at 5 PM, so don’t make the mistake to go up there at 4 PM (yup, we did it).

In terms of St. George Ski and Spa hotel’s facilities, we enjoyed the spa, inside pool and jacuzzi. In the spa center, there were hot chairs, sauna, steam room and aromatherapy. All were small, so I guess they may get crowded when the hotel is full. The pool was semi-large, I’d say, and the jacuzzi could take up to six people at a time.

Verdict: Sad to Check Out

Well, I must say that even though this hotel had quite a few cons that kinda ruined our initial enthusiasm about visiting Bansko, I was sad to check out.

The weather was especially beautiful that day, the sun was shining bright and I didn’t really feel like going away. After all, we became acquainted with the staff, we felt at home in our room and just generally enjoyed our experience in the charming town.

St. George Ski and Spa Hotel has a wonderful spa and wellness center, including a jacuzzi and swimming-pool with natural mineral water. It's close to the gondola ski lifts at Bansko, but it does have a terrible Wi-Fi service. A portable radiator is needed in the hotel room during the winter season. So should you stay here when you go skiing in Bansko this season?

Enter the World of Luxury with W Hoboken

Tresor Sousouras Hotel in the Heart of Chaniotis, Greece

Liebster Award 2018 – For a Great Start of the New Year

How to Make Three Different Types of Coffee

Please login to join discussion
No Result
View All Result