Tasty Greece: What to Eat in Greece This Summer

by Iva
in Travel Guides
Reading Time: 7 mins read
Share on FacebookShare on Twitter
Please note this post may contain affiliate links. IvaSays may earn an Affiliate Commission if you purchase something through recommended links in this article, at no extra cost to you.

Anyone who has been reading my blog posts knows my love for the Greek culture and nature. However, what I haven’t mentioned so far is my love towards the Greek cuisine. Plus, those planning to visit Greece this summer or in the future certainly wonder what dishes are popular in Greece. Hence, I decided to prepare this blog post, which is completely dedicated to Greek food.

Below I’ve listed some of my favorite Greek dishes, but also certain must-try specialties as well. After all, I strongly believe that tasting new food is as important as visiting new destinations. At the end of the post, I’ve also included certain deserts as well as drinks; not all of them are my first pick, but they have my respect nonetheless. 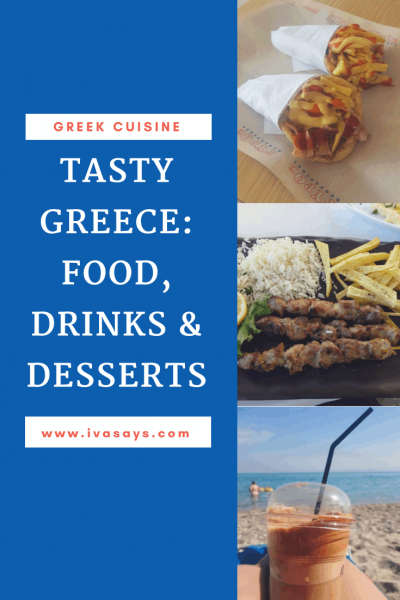 What to Eat in Greece

Definitely my personal favorite, Gyro is something you simply have to try when in Greece. Many people compare it to the Turkish doner; however, Gyro, at least these days, is made with pork meat and features the authentic tzatziki sauce as well as a specific Gyro pita (oily and thick flatbread made of dough).

Picky eaters have inspired restaurants to offer chicken Gyro as well. You can find it as Gyro pita, which is the cheaper and, I believe, the best variant. The Gyro pita, in my opinion, is the Greek fast-food; it’s cheap, tasty, greasy and quick to get. However, you can also get a portion where everything is served separately in a large plate; I say where’s the fun in that?

Note: Depending on the place, there may or may not be tzatziki included in the Gyro. Sometimes, they charge extra for this and sometimes it’s included in the price. Also, the basic things in Gyro pita are pork meat, French fries and ketchup and mustard. There will probably be a selection of additions such as onion, tzatziki, tomatoes etc.

My way of ordering Gyro usually is: “One pork Gyro pita complet” (meaning I want everything in it).

According to this Easy Tzatziki Recipe, you can prepare this Greek dish within 15 minutes. It includes Greek yogurt, cucumber, garlic, dill, lemon zest, salt, and pepper.

Tzatziki is something everyone in Greece must try. It’s refreshing, tasty and goes with pretty much everything.

I like it on toasted bread, while my mom prefers to have it while she’s drinking Ouzo. Either way, tzatziki rules! Those that don’t like garlic can probably order or make it without garlic, but believe me, the garlic makes all the difference between a boring appetizer and an exotic Greek dish.

Feta cheese is white cheese made from sheep’s or a mix of sheep’s and goat’s milk. It’s very popular in Greece and you can find it plain or in other dishes, such as the famous Greek salad.

Souvlaki sounds pretty exotic; however, souvlaki is actually a Greek skewer. Unlike the skewers we’re used to, souvlakia includes very small squares of meat, and rarely vegetable, on a skewer. Restaurants often serve it with French fries or rice.

Souvlaki is usually made with pork meat, but you can also find it in a chicken version as well. I prefer eating souvlaki in a portion; however, you can also get in a pita, just like the one used for Gyro.

Well, I may be unfair to other Greek pastry specialties, as Greek bakeries often seem like a wonderland. However, I’ve only tried the Tiropita and the Bougatsa (read about it under desserts) and hence I’m mentioning only these two.

Tiropita is a popular Greek pastry which translates into cheese pie. This type of pie is filled with feta cheese and takes you to heaven with every bite you take.

Greece is a coastal country that has access not to one, but to three seas – Ionian, Aegean, and Libyan. The result, is obviously, fresh and delicious seafood. I know that seafood isn’t everyone’s cup of tea, but I personally enjoy it. I like to have fried calamari (squids) and grilled octopus or grilled fish.

I always ask in tavernas (traditional Greek restaurants) to recommend me their best seafood dishes and go with the flow. Thus, if you enjoy seafood, prepare to be mind-blown in this sunny country.

Greeks love meat dishes and therefore you can find lots of grilled meat options over there. Pork ribs, burgers, pork chops, chicken file and pretty much everything you can imagine is on the offer. However, you just have to make sure that you’re at the right place as some tavernas serve seafood only.

Moussaka is a dish we have in Macedonia as well; therefore, I never actually have it in Greece. I don’t like it anyway. However, Greek moussaka is a big deal and deserves to be mentioned as it’s a true traditional Greek dish. It includes minced meat and either potatoes or eggplants; the top of the dish often includes a milk-based sauce that is topped with a mixture of eggs and flour.

Many Greek streets have a magical sweet scent from all the delicious desserts prepared in bakeries and restaurants. I’ll try to cover some of them below, even though the list can be much longer.

Baklava is something you’ll find in Turkey and also in many Balkan countries. It is popular in Greece as well. I don’t enjoy baklava as it’s too strong and sugary for me, however, many people seem to love it. This dessert is made of layers of pastry, filled with chopped nuts and covered in honey or syrup.

This is something authentic as well as something I like. Often, after you’re done with your meal in a restaurant, the owner will treat you with a free dessert that usually happens to be yogurt and honey. They use the strong-flavored Greek yogurt, then pour honey over it and sometimes add chopped nuts. It sounds weird, but it’s very tasty and refreshing.

Bougatsa, a pastry like the Tiropita, is made with vanilla cream (I’m sure there’s more to it, but I’m no pastry master) and is served as a desert. So far, when I’ve ordered bougatsa, it would be chop in small pieces and topped off with sugar and cinnamon. Believe me, it’s very tasty!

Loukoumades are deep-fried dough balls, topped with honey, chopped nuts and cinnamon. Sometimes they can be served with chocolate syrup instead. They are delicious and strong, a perfect dessert for those that love extremely sweet dishes. Don’t be surprised to see people selling them on the beach in plastic cups and various additions.

These things are just as we know them. There are lots of places where you can order crepes, all kinds of ice-cream or fresh fruit salads.

What to Drink in Greece

Once again, I’ll try to cover certain areas, even though the list of what to drink in Greece is pretty long regardless of whether the focus is on alcoholic or non-alcoholic beverages.

Local beer – I love beer and it comes naturally to me to mention local beer first. I’ve tried Mythos, Vergina, FIX, Alfa and Pils Hellas. Mythos is my favorite so far, which is a light beer, a lager.

Retsina – Retsina is a popular Greek drink, which is actually white resonated wine. Retsina has a nice flavor and it goes perfectly mixed with sparkling water. Regardless whether you mix it or not, it’s very refreshing and perfect for hot Greek evenings.

Ouzo – I’ve mentioned it a few times already, but finally, we got to the Ouzo. This is an anise-flavored aperitif, which is very popular in Greece. It is often served in tall and thin glasses filled with ice. Ouzo is transparent, but when mixed with ice it becomes white and mysterious. It’s too strong for me, but I know lots of people that enjoy consuming it.

Frape – I’ve been surprised with the fact that many people are unfamiliar with the concept of Frape. I had a friend from the US here a few months ago, and we went to Greece, and she was completely stunned by Frape. Well, this is a cold instant-coffee drink that includes milk and lots of ice (learn how to make a Frape and other types of coffee local to the Balkans).

All in all, regardless whether you are a picky eater, a meat lover or vegetarian, you’ll definitely have lots of dish options in Greece. This country appreciates food and makes sure that everyone eats well, no matter what their food preferences are. Even though most of the dishes here are meat-based, Greece boasts with lots of fresh produce that can be served grilled, steamed or fresh; thus, not only you’ll rejuvenate your body and mind, but you’ll also treat your taste buds as well.

Tip: If you enjoyed this post, make sure to check out my Tasty Germany post as well, which is a guide to Germany’s finest dishes.

Beat The Blogging Competition With Style

The best of Malta in 7 days: a tour guide

K-POP Things To Do In Seoul, Korea

Beat The Blogging Competition With Style

Blog Your Way to a Bigger Bank Balance